1) Grease the sides and bottom of a 13×9″ baking pan. Then, cover evenly with powdered sugar.

2) In a stand mixer bowl, or other large metal bowl, add 1/2 cup of Pioneer Blend Cold Brew Coffee. Sprinkle 3 1/2 packets of unflavored gelatin directly on top of the cold brew and let it soften.

3) In a heavy-bottomed pot, you’ll combine another 1/2 cup of cold brew coffee, sugar, corn syrup, and a pinch of salt. 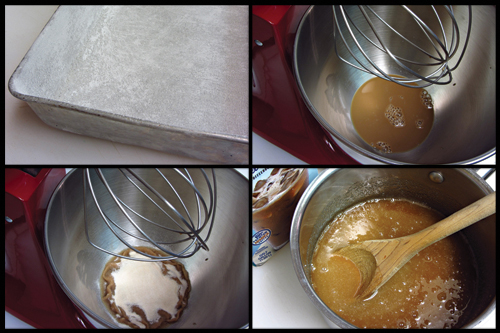 The pot with the sugar/cold brew mixture is cooked on the stove top on medium heat, stirring constantly, but gently until all the sugar is dissolved.

Once the sugar is dissolved, stop stirring, clip your candy thermometer inside the pan and allow the mixture to come to a boil (with NO stirring!).

As it comes to a boil, the mixture will bubble and rise, so make sure you are using a pot that is large enough. Also be sure that you are keeping the heat at medium, no higher.

Once the mixture reaches 240 degrees F, remove from the heat immediately and pour into your your metal bowl and stir to combine this sugar/coffee mixture with the gelatin. Gelatin is a bit clumpy at first, but keep stirring until gelatin is completely dissolved.

Then, beat the mixture on high until it becomes whiter and thicker. 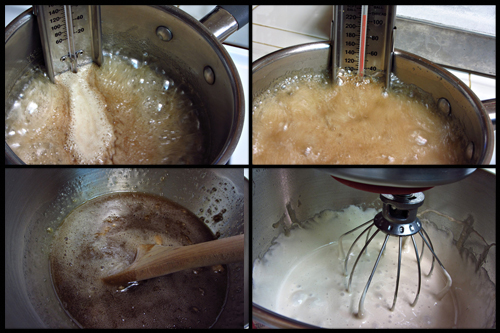 While the mixture is beating in your stand mixer (or after it’s done if using a hand-held mixer), beat two egg whites in a bowl until stiff peaks form.

When your sugar/cold brew coffee mixture is very thick and is about 2-3 times the amount you originally started with, beat in the egg whites until just barely combined (don’t overdo it).

Pour the mixture in the prepared pan and spread evenly. It's good practice to tap the bottom of the pan by hand or on the counter top to work out the air bubbles.

Sift powdered sugar on the top of the mixture and allow to sit and firm up for about 4 hours (minimum) or overnight. 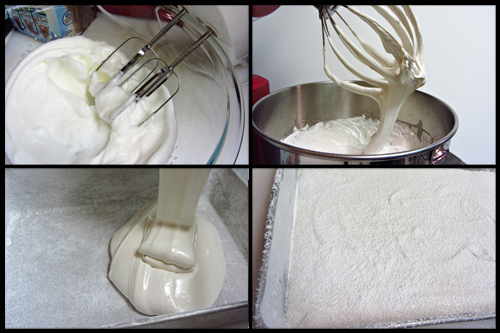 Place the pan on it’s side and with the knife, gently lift up one of the corners and allow the marshmallow to fall out onto a cutting board. Dip a knife, or a pizza cutter, in powdered sugar and cut the marshmallow into strips and then into squares.

Gently toss each square in a bowl that has powdered sugar in it. Dust off the excess and place on a plate.

*Cold Brew Coffee Marshmallows Recipe courteous of "Home Cooking Recipes" but with a few modifications
(you guys are awesome!)